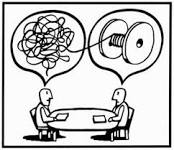 As writers, we elect ourselves both self-translators and self-editors. Expression requires some sort of conversion between the unuttered thing and the utterance. For many of us, that process involves turning raw experience into language (that is, into words raw and/or refined). In his poem “Autobiography,” student and close friend of Carolyn Kizer, David Rigsbee, writes about the place where experience ends and the making begins–namely, the construction of memory, which treads directly behind “being,” forming the bridge on which we may work our lives into language: “As soon as you leave you enter / memory and that small emissary / of yourself immediately loses / credentials… each fresh / installment of yourself, though / exquisite, is still lump clay.”

Too, during the revision process, we have decided to treat some written draft as clay, as the trace of credentials again lost. Isn’t it a draft precisely because something treads behind it? In REvisiting our words, we call them, to a certain degree, un-utterance, and set off again translating.

1. To render in another language

2. a) To put in simpler terms; explain or interpret

4. To transfer from one place or condition to another

6. a) (Ecclesiastical) To transfer (a bishop) to another see

b) To convey to heaven without death

6. (BioChem) To transform the molecular structure of (messenger RNA) into a polypeptide chain by means of the information stored in the genetic code

9. (Roman Catholic Church) To transfer (the body or the relics of a saint) from one resting place to another

11. (Physics) To move (a figure or body) laterally, without rotation, dilation, or angular displacement

“Wind going after is like the body’s dying / into the body of a growing text, / each story pressing rapidly over the next,” writes Rigsbee in one of his “Sonnets to Hamlet.” For fun and for fascination’s sake, we present below two first-person “translations” of the same memory–the first prose, the second poetry–both penned by Rigsbee. Note the way that the poem both rewrites and overwrites, both conveys and buries, the prose account.

One day Carolyn called me up and said “Let’s go over to Duke.  There’s an eminent scholar who is going to lecture on Mayakovsky and another poet you may know.”  The eminent scholar turned out to be Harvard professor Roman Yakobson, the world-famous linguist and one of the last survivors to the Soviet Union’s “New Lef” period, which roughly coincided with the flapper era here and ended with the accession of Joseph Stalin, as it did here with the coming of the Great Depression. So we piled into the Camaro and off to Durham we went.

The hall was long, narrow, high-ceilinged and ornate, with floor-length curtains.  The whole effect was chapel-like, except for the chairs, which were in a kind of faux-Empire style, with pastel cushions and oval backs, the kind of furnishing my bottom was to become familiar with in following years when I attended AWP and MLA conventions and sat through countless readings, symposia, appreciations, lectures, and plenary sessions.  The aisle was right down the middle, and the room was full except for the first row.  It looked like the entire professoriat of the university–a complete set of “budge doctors of the Stoic fur,” in Milton’s wild phrase, but Carolyn began to make her way regally down the aisle, paying no mind to the glowering, mostly bearded audience, with me as unlikely escort to claim, as by right, the first-row seat.  If the room had been an orchestra pit, she would have picked the concert master’s chair.  We sat, two by-no-means small individuals, on the front row, and professor Yakobson was duly introduced.

The subject was Vladimir Khlebnikov’s “Sound Poetry,” an experimental super-onomatopoeic genre that sought to liberate words from their signifiers.  Yakobson had been an intimate of Mayakovsky and Yesenin—and presumably of the ancient Lily Brik, Mayakovsky’s lover, who lived on the upper east side of New York.  So to me he was history itself, and as a new Russian and English double-major, I looked forward eagerly to his report from lost time.  Professor Yakobson emerged, a tiny man is a brown suit with a shock of silken hair that stood straight up. He said some words by way of introduction to Khlebnikov’s project, and then began to recite the poet’s “cricket poem,” consisting of a series of vowel-less ticks and pops.  No sooner was he underway with an impassioned rendition to the deferential, if perplexed, audience, than Carolyn pulled out a compact and brush and proceeded to groom and adjust her coiffure with lengthy strokes, followed by her pulling the remaining hairs from the bristles and dropping them on the Duke University carpet.  Then she would consult the compact mirror, tilting her head and offering the glass first her face full-on, then in partial profile.  The good professor darted annoyed looks at Carolyn, but she was not seeing them and he continued dutifully with his recitation.  When she was satisfied with her own result, she thrust the compact and brush into her clutch and looked up, as if to see what manner of man was making these extraordinary noises in the name of poetry.  Famous already for taking the measure in a glance, she sat for the rest of the lecture with a look of bemused tolerance on her face.  As for me, I sat beside her with a combination of astonishment, pride, and outrage at my teacher’s behavior.  I was embarrassed too, but the chutzpah itself diminished the negatives.  When I mentioned this anecdote to my 20-year-old (Carolyn’s granddaughter) recently, she replied, “Perfect!”

I went with my teacher to a lecture once
in an ornate hall:  long windows and Empire chairs.
The diminutive scholar was legendary:
he had been a confidante of Mayakovsky
and friend of the then-still-living Lilia Brik.
He had made formalism all the rage and so
blended nicely at Harvard when Stalin yanked
the choke-chain, and poets vanished in
binges of murder, imprisonment, and suicide.
We were late, and only a few unoccupied seats
were scattered about the hall.  So down
the aisle we strode past more professors
than I had ever seen in one place.
Bearded, severe, they followed our entrance
with all the disapproval a Ph.D. can muster.
My teacher, a fierce blonde and former model,
countered with the aplomb of two well-received books
and parked herself on the front row, me next to her.
This distinguished professor announced that he
would recite a poem by Velimir Khlebnikov
by way of warming to his subject,
which was “sound verse,” in Russian—zum.
Then he began to present what Khlebnikov
had claimed was a new poetry to counter
the tyranny of significance.  Stepping gingerly
before the august audience, he started
to emit clicking sounds and to gesture
like an old-school Thespian.  A silence went up
from the audience, unsure if it was
being played, or if it was just collectively
missing the boat altogether.  At that point
my teacher reached into her purse
and extracted a compact and brush.
She opened the compact and gazed
at her own countenance for what seemed
a full minute, then began to brush
her hair with long strokes, pausing
every few to extract the captive hairs
and drop them on the university carpet.
The scholar pretended there was nothing
amiss and soldiered on with his rendering
of the poet’s cricket impression, nonetheless
aware of the Amazonian woman not four
feet from him, so tall that in merely sitting
she easily matched his standing height.
When she had done, she put the brush away,
checked herself one last time, then snapped
the compact shut.  With hands in lap
she sighed once and turned to the poetry reading
at last, letting her gray eyes come to rest
on the important little man and his recitation.
To this day, I don’t know which was the better
performance. But each taught me something invaluable
about poetry, that art where I stood eager
to begin my work, that small country,
that Switzerland of decorum and peace
that lies between nonsense and vanity.